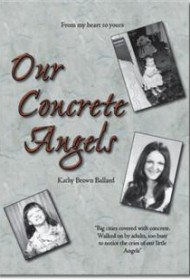 In her memoir Our Concrete Angels, Kathy Brown Ballard recalls the countless abuses she and her siblings were forced to endure while being raised in a house of perversion. At a very young age, the children were taught by their mentally unstable father that women were put on earth by God to serve men. In addition to his crude rants, he perpetually molested his young daughters. Although having full knowledge of the abuse, their mother ignored it, did her best to keep the children quiet about it – and sometimes even encouraged it.

Eventually their father became so mentally ill that he was forced out of the house. Kathy and her sisters were then introduced to Earl, their mother’s boyfriend, whose offenses were far more blatant. Their mother continued to perpetuate the abuse. Eventually, Earl impregnated Kathy’s 16-year-old sister and took her as his bride.

The story occurs mostly in Texas during the ’60s and is told from the viewpoint of a very young and innocent girl. Brown captures the innocence of childhood and the awkward beginnings of adolescence well. But while the story is intensely gripping, it is plagued by spelling and grammatical errors. A copy editor would have been useful in freeing the reader of all the book’s distracting blemishes. In addition to mechanical issues, Brown’s prose is burdened with clichÃ©s, as in: “he had done enough sole [sic] searching to know what he needed and wanted to do.”

That said, the book achieves its purpose: “To bring peace and insight to all who have suffered abuse.” For those coming from similar circumstances, Ballard’s story will inspire strength and offer a form of understanding. For others, it will serve to educate.