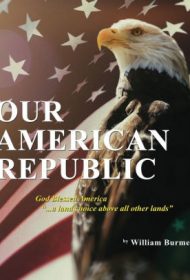 William Burmer’s Our American Republic, is an indictment of the current state of the American political system from a libertarian-leaning, conservative perspective. In it, Burmer leverages historical documents to argue that we have strayed from our founders’ principles, turned away from the Constitution and Christian values, and consequently have seen a rise in tyrannical government met mostly by ignorance and apathy.

Burmer’s most prominent assertions are thoroughly debunked conspiracy theories. For example, he argues that the original 13th Amendment was ratified but dropped from the Constitution because it would have kept lawyers out of politics and that specific loopholes invalidate the federal government’s authority to tax individuals. Some of his other assertions are strawman arguments, such as his claim that the ACLU opposed teaching abstinence in sex education when, in fact, they opposed abstinence-only education, an important distinction.

Burmer doesn’t explicitly name himself as part of the Sovereign Citizens movement. However, he does use the term “sovereign citizen” often, particularly in reference to his view of illegitimate taxation by the U.S. government, and his views generally align with others in that movement. (The FBI has described Sovereign Citizens’ actions as “Domestic Terrorism,” although Burmer doesn’t endorse violence.)

The narrative is replete with grammatical issues: misplaced commas, quotation marks that open but don’t close, incorrect word choices (e.g., “to spite” instead of “despite” and “succession” rather than “secession”). Confusingly, Burmer refers to the Trump and Clinton presidencies in the present tense at different points. And the author reprints lengthy American foundational documents, mid-narrative, in their entirety, often with little analysis. Finally, readers will find it hard to decipher which words are the author’s and which, despite only sporadic citations, seem to arise from elsewhere.

Burmer’s impulses are not altogether unreasonable. Many share his feeling that government is too corrupt, bloated, and bureaucratic. But Our American Republic ultimately reads more like a disorganized diatribe based on questionable assertions than the reasoned political thesis it claims to be.