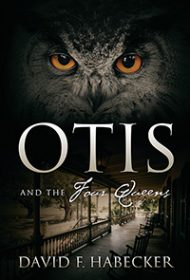 David F. Habecker’s lively historical novel, Otis and the Four Queens, traces one man’s unconventional life through the Civil War and beyond.

Otis Warren Lockley is born around 1840 in a Hudson River hamlet. He learns to hunt from his beloved grandfather and later serves as a sharpshooter in the Union Army. As stealthy and silent as an owl—it’s no accident his initials are the bird’s name—Otis earns a reputation as a ghostly assassin.

The first few chapters cover a lot of ground, with major elements like Otis’s war service and marriage getting short shrift. At war’s end, learning that his wife has left him for his father, Otis retreats to the Catskills and builds a lean-to. When the men employed by powerful aristocrat Major Starrett confuse Otis for Wallace “Pad” Paddington, a hermit they’ve tried to displace for years, they shoot him for trespassing. Pad nurses Otis back to health. After the major’s henchmen come back for Pad, Otis vows revenge on behalf of “the Four Queens”: Pad’s daughters Elsa and Deedee, plus two black women they took in years ago, sisters Bonnie and Nell.

Otis’s retribution against the major and his goons seems unnecessarily brutal. Oddly, after this graphic interlude, the novel switches gears to become a sort of sex comedy. Elsa proposes that Otis sleep with all four of the women in turn to give them children. In between fathering seven children, Otis keeps an eye on the ongoing investigations into his ruthless act, knowing he may need to skip town at any moment.

The book maintains a steady pace and the occasional passages of second-person narration add novelty. However, the plot’s different sections don’t seem to fit together and are jarring.

While a smoother melding of genres would attract a wider readership, the book may hold some appeal for fans of The Sisters Brothers and The Secret Life of Bees, which are thematically similar to Otis.