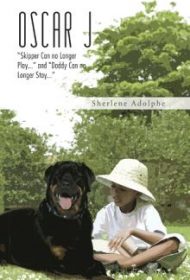 There is almost always sadness and grief in childhood, but often it is minimized by well-meaning adults.

British author Sherlene Adolphe understands that children see more than they let on and feel things deeply, even if those feelings can get jumbled. In her unique and accessible long-form poetry – she calls it “fictional verse” – Adolphe captures the conflicting emotions that a young boy named Oscar J feels when faced with heartbreaking events.

The first poem, “Skipper Can No Longer Play,” is about the death of his dog. The strength of Adolphe’s work is in its believability. Losing a pet is gut-wrenching for anyone, but she manages to bring Oscar’s pain and confusion to a palatable level. He asks: “Was it my fault? What did I do?/ Did he go because I behaved badly the other day and/ refused to listen to you?”

The second poem, “Daddy Can No Longer Stay,” is shorter but starker, revealing Oscar’s anger, fear and helplessness as his parents’ marriage dissolves. The boy remembers the happier times and again wonders if he is to blame. During a night of threats and fighting, Oscar hears all: “Pulling his duvet over his head./ Praying that it would muffle any more that they shouted.”

Adolphe notes that her poems are part of a series to help children cope with things that happen outside their control. It’s unclear what age she’s targeting. The first poem seems to be for younger children, the second for those older. What works in both is the deceptive simplicity. There is depth even as the words are spare. Using poetry is an effective way of stripping away the superfluous.

Since this is geared to children, it would have been nice if illustrations had been included. Also, the author sometimes forces rhymes or loses the proper rhythm. But young readers will likely overlook such things. It will be interesting to see what future topics Adolphe chooses to tackle following this promising start.