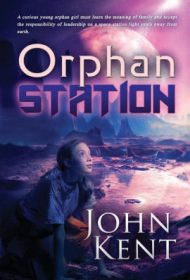 In a future where human colonies are scattered across the stars, the titular Orphan Station is a remote outpost for pioneers travelling to the farthest reaches of occupied space. It’s also the home of Selene Sotana, an 11-year-old girl who, after her parents died when she was young, has been raised by the exclusively male crew of Orphan Station.

Selene hasn’t been permitted an ordinary childhood. She’s had adult responsibilities her entire life and has never met another child or a woman. Her friends are her artificial intelligence program and a dog rescued for her by the station’s captain. Although the crew, whom she calls her “uncles,” accept her as their own, one unstable crew member grows unexpectedly threatening.

Narrowly surviving an encounter with him, Selene is set on a path to discover the truth behind her parents’ deaths and the secret connection she shares with the captain. Later, when tasked with helping rescue a spaceship in duress, those connections are tested and she has to rely on everything her uncles have taught her to orchestrate first the rescue of strangers, and then of herself.

Orphan Station is a coming-of-age story for a girl never permitted a genuine childhood. Given its perspective of a strong pre-adolescent girl, it could be considered a young adult novel, with the note that there are adult themes, including a moment of threatened sexual violence that is more implied than explicit. The setting is inherently claustrophobic, and the single perspective leaves the story feeling a bit cramped, but it comes powerfully alive when outside characters are finally introduced (about two-thirds of the way through).

A thoughtful approach to science fiction storytelling, Orphan Station takes time to build, but for fans of classic science fiction (especially Ender’s Game), it delivers an unusual character,  imaginative setting and reflective plot sure to intrigue.