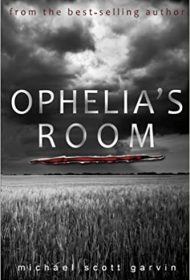 Michael Scott Garvin’s Ophelia’s Room is a rare hybrid that inhabits the interstitial space between a thriller, whodunit, and literary novel about Americana and American values. Set in the late 1960s, it’s at once a gripping drama about a murder and an intriguing exploration of the relationship between religion and guilt.

Parsons, Kansas, is a small town “populated with God-fearing, hard-working folks.” However, when a grandfather kills a newborn with a rosary, residents start believing evil is amongst them; that, instead of a deranged man, “Satan himself” walked the corridors of Mercy Medical and took the baby’s life.

Grieving parents Delia and Charlie are left to pick up the pieces. But soon the residents start whispering that Delia is to blame for the darkness in Parsons. When a teacher named Betty Malcomb comes to town, her presence brings to the surface the ugliness that can hide in every small town.

Religion, suspicion, and gossip frame and shape Ophelia’s Room. This is a novel about judging and being judged, and the negative effects both can have. There are many characters at play, but Garvin manages to keep his focus while exploring their lives and allows dialogue to carry most of the action.

The mixture of darkness and religion is a running thread, and one of the most powerful lines in the book—one that pushes it as close to horror as it gets during the baby killing scene—comes from the mouth of a prisoner: “Father, we’re all hunted. Folks go about believin’ their little houses will keep ’em safe from harm…. Like sheep to the slaughter, folks don’t suspect danger is lurking, until one sad day when the hunter arrives, stalkin ’em like a wolf.”

Highly recommended for fans of Brian Evenson and Joe Lansdale.