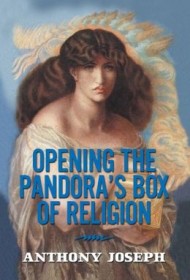 In Opening the Pandora’s Box of Religion, Anthony Joseph examines positive and negative aspects of the world’s religious traditions in light of the 9/11 terrorist attacks.

Joseph holds that the measure of a religion is its ability to lead neophytes to an experience of mystical union. He believes that a systematic teaching, including explicit practices leading to spiritual experience, is characteristic of evolved religious traditions, while blind faith correlates with tribal primitivism. He evaluates the world’s religions based on this distinction and discusses assorted spiritual topics, inspired by his studies of Eastern religions.

Central to the author’s argument is the false claim that “Christianity has no continuous or systematic thread of esoteric thought.” To find this thread, one has only to look to the third largest Christian denomination: Eastern Orthodoxy. The Philokalia, a compendium of Orthodox Christian writings, presents a practical teaching oriented toward union with the Divine that is as detailed as that within any other religion.

The Christian mystical path is reflected also in the Russian spiritual classic The Way of the Pilgrim, available in English translation, and Vladimir Lossky’s The Mystical Theology of the Eastern Church. More recent studies include Robin Amis’s A Different Christianity and Kyriacos Markides’s The Mountain of Silence and Gifts of the Desert. All are available widely; Joseph’s ignorance of them raises questions about his diligence and objectivity.

The spiritual masters Joseph admires modeled humility and counseled taking responsibility for one’s knowledge claims. By contrast, Joseph boldly claims to know the “spiritual level” of the earliest disciples of Christ and of Mohammed. Brazenly, he arranges ancient traditions with billions of adherents in a hierarchy based on the level of spiritual evolution he believes they represent. Islam and Catholicism are viewed particularly harshly.

Tenuous claims serving sweeping, pejorative generalizations are unlikely to counter the intolerance that leads to tragedies such as 9/11. As such, readers will want to approach this book with a healthy amount of skepticism.