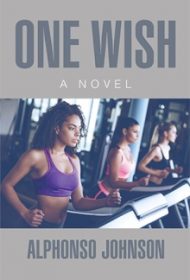 Romantic entanglements can be the stuff of great drama while also providing comedic fodder. There’s a little of both in One Wish, as author Alphonso Johnson creates an outsize female protagonist that seems inspired, at least in part, by the work of filmmaker Tyler Perry and turns her loose—to everyone’s regret.

The story opens with Lonny leaving his wife, Marge, for the mysterious Adina Lydia Medina. An advanced martial artist, Adina is quick to beat Lonny up when it suits her, to the point where he eventually escapes to California. Marge is devastated at the loss of her marriage and works to reinvent herself.

Meanwhile, Adina hires a P.I. to find Lonny so she can get him back, and a washed up former R&B singer named Belinda gets in the middle of things, befriending Marge, flirting with Lonny, and carrying a briefcase full of dirty money she found after accidentally driving into a robbery in progress. Then things really start to get complicated.

Johnson clearly has big ideas for these characters, but the writing frequently fails to explain their thoughts and actions adequately. Additionally, there’s a surreal passage where Lonny is pursued by thugs and leaps over a tall building—an action that is never set up or explained—and a recurring bit involving Adina’s parakeets, who will only sing for her, but gossip about her behind her back to anyone else they meet. These elements would add humor to the story if the narrative gave some context for them, but lacking that, they just seem odd and out of place.

One Wish has bits of dialogue that ring true to life and some settings that also feel realistic, but the overall tone and approach is uneven, making it hard for readers to reconcile the real and surreal. With comprehensive editing for clarity, the shifts in tone may be less jarring, lending the book greater appeal.