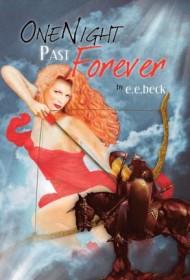 Part mystery, part thriller, One Night Past Forever is a spider’s web of three interconnecting story lines: a woman in hiding, two superhuman killers and two agents from a top-secret U.S. agency. What connects these characters is a ruthless band of Mexican army fighters called the Zetas, hired by the Mexican drug cartels. By blending the protagonists’ pasts and presents, author E.E. Beck slowly leads the story to a tumultuous head-on climax that any action fan would appreciate before finally exposing the bigger truth behind it all.

Like other mystery/thrillers, One Night aims to lead the reader to the conclusion without giving away too much, withholding details until just the right time. However, much of the beginning of the book feels too cryptic, with details coming pages (sometimes chapters) before their explanations; 40 pages in, it’s still not clear who or what the story is about.

Though the plot is difficult to follow at first, the writing is laudable. Beck consistently demonstrates an intellectual prowess, with dozens of relevant song and poetry excerpts, advanced military weapons research and smart dialogue, as when one character explains, “To say that 1918 was a seminal moment in human history is an understatement on par with saying Jeffrey Dahmer had an eating disorder.”

The book’s shining moment is the thrilling climax, a fight scene between three main characters and 300-plus Zetas. The story becomes so enthralling that one cannot put the book down. It’s easy to imagine it on the big screen.

With some tweaks, One Night has the potential to be a fine thriller/mystery. Though it doesn’t provide enough details about characters and connections in the beginning, by the end of the book the fog dissipates so that the whole picture comes into focus and begs to be read again to be better understood.