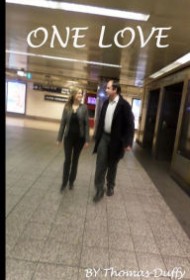 Timothy Anderson discovers that the person closest to him might be his One Love in Thomas Duffy’s third novel.

Timothy is an aspiring writer when he graduates from college in New York City. He’s also longing to find his one love and connects with Melody, a young woman he meets through a newspaper personal ad. At the end of their first date, Timothy’s in love and tells Melody this following their long goodbye. But after calling Melody once, she gives him the brush off and he doesn’t hear from her again. He ultimately moves on, meeting Cindy. Although Timothy doesn’t feel the same way for Cindy as he did for Melody, the two fall into a long-term relationship.

Years later, Timothy is working in retail, trying to support himself and Cindy, who suffers from a social-anxiety disorder. Through Facebook, he eventually reconnects with Melody. She is now living on Long Island, married with three children. Despite their marriages, they begin an affair, which leads them to reexamine their relationships.

Author Thomas Duffy shows heart in his story about characters looking for love, but his tendency to rely heavily on summarizing character dialogue and action, rather than showing it, is a major shortcoming of the novel. Additionally, main characters don’t always act rationally. With the exception of Melody, for example, characters complain about their continuous financial struggles, yet seem unwilling to rectify them. (When Cindy’s mom takes a job at a drug store to help pay bills, she quits after one day, deciding work isn’t for her.)

Finally, Timothy and Melody’s affair feels like two people bored with their significant others rather than possible soul mates joyously uniting. Constant, abrupt shifts in points-of-view and poor copyediting also contribute to the book’s weaknesses.

Duffy has tried to tell a love story, but that tale gets lost in the narrative’s weaknesses, ultimately making for a frustrating read overall.