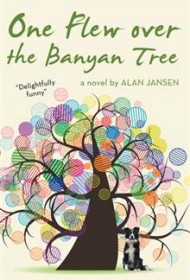 The story finds Rohan at a crucial moment in his young life. Rohan’s beloved father has abandoned his wife and four children after an embezzlement scandal, and the once-prosperous family is reduced to living with Rohan’s demanding Grandmummy, aka “the Dragon,” in a hard-bitten part of town called Jellicoe Junction.

It is from this low but fascinating vantage that Rohan starts to understand the world. He meets the happy layabouts—Catnips, Bellakay and Uncle Pongo, among others—who spend their days bickering at a cafe called the Nameless and serve as the book’s Greek Chorus. He endures his two wretched, wanton aunts, who heap Cinderella-style cruelties upon his beleaguered mother. He falls in wounding puppy-love with his cousin Ida, witnesses the local Dark Arts when a phony shaman forces poisonous root-tea on the gullible during a solar eclipse, and sees political absurdity up close when one of the indolent patrons of the Nameless runs for Parliament.

But no character rivals Grandmummy, a penurious monster who clings to the receding values of the British Empire as she terrorizes all in her path.

Alan Jansen furnishes his debut novel with other whimsies, including a peculiar style of English—stuffy, pseudo-Victorian—that can annoy as often as it charms. A humorless uncle “had yearned to administer corporal punishment on Rohan, but stayed his hand”; the Dragon’s lodger, Mr. Sera, offers “a quixotic riposte” and so on. The 476-page book’s glacial pace also does it no good; its comedy might sting best at half that length.

But Jansen brings so much light-hearted affection to this tale of growing-up in a fondly remembered place that readers will find it hard to resist its warmth.