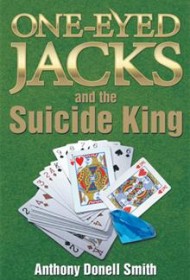 Anthony Donell Smith’s One-Eyed Jacks and the Suicide King aims to present a philosophical fusion of magic realism and allegory. Its flawed presentation, however, makes it a deeply challenging read.

The novel seems to be structured as a series of inter-connected stories featuring character archetypes based on playing card symbolism  (King of Hearts, Jack of Hearts, King of Spades, etc.). It begins in a magical realm where King Solomon Hearts meets with the Duke of Spades to discuss the safety of the realm, where females are being “accosted by some unidentifiable force.” Both ultimately want to rule the land, and their conversation—and overall politically intricate relationship—seems to be an allegoric poker game. Additionally, the King of Hearts is plotting to kill his wife, the Queen of Hearts, whose extensive knowledge of his indiscretions could put the realm in danger.

The simile “life is like a poker game” appears to be a philosophical motif throughout, and, as evidenced by the characters’ fates involved, it all comes down to how you play your cards.

But all of this is open to interpretation, as the story doesn’t progress in a linear way, making it difficult to follow, and there’s no focus whatsoever on integral narrative elements such as character development, description, world-building, plot intricacy, etc. Readers will find it hard to become emotionally attached to any of the characters or immersed in the story.

Unclear writing greatly adds to the book’s problems. Readers will be scratching their heads after sequences like this: “She usually hid in the library until the other school society had left. But today she was not alone in that library. She opened up the book and it had pictures translated into writing.”  Or this: “Two good friends had feet tapping the floor in sync as harmony emanated from Bundy’s study.”

In short, this story’s effectiveness is lost in its writing flaws and the novel is unlikely to find an audience without thorough revision.