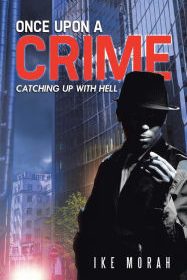 Parallel stories of good and evil that eventually collide can be thrilling and philosophical at once. Once Upon A Crime begins with such a premise, but misses more opportunities than it’s able to capitalize on. It’s violent and exciting, but very hard to follow.

Iskar loses his whole family in a violent attack and dedicates his life to revenge, becoming a sort of super-villain. He kills his enemies, sells drugs, sleeps around and, when the heat is on, fakes his own death to get a fresh start. Ike lost his family, too, and was raised by nuns. He is dispatched by the government to bring Iskar to justice, and the two battle it out in “explosive mind-bugling [sic] action,” as the narrator describes the fight that ensues.

Author Ike Morah has a solid conceit, but the Nigerian–born author seems to struggle with proper English. Misspellings and poor grammar make reading challenging, as do the many misused English colloquialisms (“bashed an eyelid”) and confused Afrikaans (“bill tongues” instead of “biltong”).

The first three-quarters of the book reads like a list of Iskar’s dirty dealings, and the final act is an extended fight scene that goes on far too long. A confusing statement in the Introduction (“In other words this book…might contain some facts that are not exactly accurate. They are being recanted [sic] just as they were told.”) seems designed to lead us to believe this is a true story, but it’s unclear if this is so.

Ultimately, all these issues combine to make reading difficult. Morah has a fine instinct for what constitutes a gripping story, but Once Upon A Crime needs comprehensive edits before it is ready for an audience.