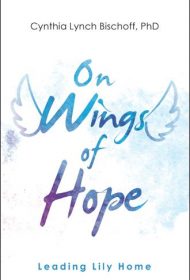 “Do you think I loved well?” were among the final words Lily uttered to Cynthia Lynch Bischoff, her mentor and friend, as she succumbed to the ravages of cancer at age 43. Bischoff’s memoir poignantly recalls the nine years she counseled the young woman as she faced her devastating diagnosis.

An internationally known speaker, life coach and energy practitioner, Bischoff began discovering her ability to see “signs and symbols both in nature and in energy around me” at age eight. She was eventually trained in “energy healing” and “shamanic treatments,” allowing her to use her intuitive abilities to help clients find meaning and peace in their circumstances. At times, she was also able to channel those in the spirit world.

Bischoff guided Lily, who was diagnosed with breast cancer at age 26, to face her fate with increasing inner strength. Eventually Lily came to realize that her “life theme” was about connection and that “the gift of her illness was the value she was now placing on being alive.” Lily embraced Bischoff’s teaching that “we have many lifetimes to learn the human condition.” Sitting beside Lilly as she died, Bischoff saw a “blue crystal image at the center of Lily’s heart” and assured her that she was “love itself…a beautiful soul who taught the world so much.”

Bischoff’s prose is elegantly written, seamlessly shifting between time frames. Her ability to artfully describe her surroundings and emotions (“I could feel my heart swell to the size of the room”) add a deeper understanding of the author and her singular perspective.

Much of Bischoff’s work with Lily is based on her deeply held belief in the afterlife. She reminded Lily that “Your body is simply a garment you wore during this lifetime… Your soul is forever.” Her memoir may not resonate with those skeptical of such beliefs. But anyone aligned with the author’s viewpoint who seeks meaning in the face of life’s most challenging circumstances will surely appreciate On Wings of Hope.