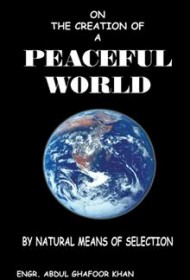 After being born in Pakistan and receiving post-graduate level education in the United Kingdom, Abdul Ghafoor Khan has worked in multiple nations as an electrical engineer. He currently resides in Saudi Arabia. His work and life experiences have combined to suggest to him a grand theory of humans on earth, a theory grounded in the balance of nature.

Unfortunately, English is not the author’s native language, and he writes so poorly in English that the grand theory is extremely difficult to grasp as a reader. Perhaps this and his previous titles are easier to understand in the original language of composition, which is Urdu.

The author’s theory seems to unfold something along this neural path: All humans, no matter their ethnicity or station in life, are part of an entity much larger than themselves. That entity is the natural world. Within that realm, an individual who harms fellow human beings will disturb the precarious balance of the natural world. When that occurs, the natural world, apparently guided by a god-like force, strikes back at its inhabitants. As examples, Khan cites environmental degradation and the foreign invasions of Afghanistan.

Those who could wield enough authority to retain the delicate balance, especially influential men and women around the globe, often fall short because they misuse the power of technology. That misuse constitutes a form of terrorism, according to the author, and could cause the ruination of modern civilization. Khan seems to call for a melding of science and religious belief to forestall destruction.

While his ideas are interesting and his intentions obviously have the good of mankind in mind, the book cannot be recommended due to the many challenges the author’s use of language presents to the reader.