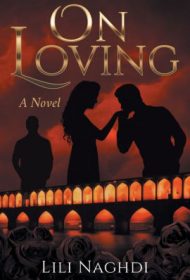 The novel, opening in 1972, centers on Rose, an Iranian orphan adopted by American parents who has recently graduated from medical school. Her beloved father’s death, weeks earlier, inspires her to travel to Iran to discover her roots. Before departing, she has a dramatic encounter with a handsome stranger, and eventually, Rose not only discovers unexpected mysteries about her origins, but also finds herself caught between two handsome men vying for her affection.

On Loving is a psychological, philosophical, and at times physiological, study of love and its complexities. Woven throughout are quotes from Persian and English literature that add insight into Rose’s experiences and confusion over what’s happening to her. Naghdi beautifully brings Vietnam era America and pre-Revolutionary Iran to life and skillfully recreates the mood of the 1970s. Narrated in first person, the story intimately pulls readers into Rose’s hopes, trials, thoughts, and angst.

However, the narrative also contains notable flaws. Rose’s voice oscillates between that of a naive young woman new to love (the overuse of exclamation points makes it read, at times, like a teenage girl’s diary) and an intellectual discussing medical and psychological issues; the latter  makes the narrative feel more like a lecture, stiltiing the story. Similarly, the drama focuses intensely between Rose’s confused feelings for each man, often recycling the same emotions of angst and hurt or love and intoxication, rather than displaying new insight. When Rose finally makes a life-altering decision, it’s jarringly abrupt.

Additionally, the number of tragedies that befall Rose in such a short period (deaths, homicide attempts, accidents, drowning, etc.) seem excessive, even for the romance genre’s wide allowance for high drama.

Despite the story’s flaws, its characters are appealing in their imperfections, passions, and longings, and the ending is pleasingly surprising, making it worth navigating the dramas to learn where they all land.