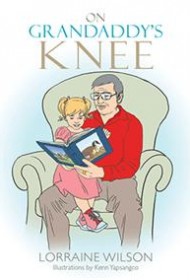 Although children love rhyming books in the Dr. Seuss vein, the concept of poetry as a deeper means of expression can be difficult to convey. Lorraine Wilson’s picture book of poems, On Grandaddy’s Knee, offers a kid-friendly entry into the world of poetry via one-page poems that amuse or strike an emotional chord.

The book’s title comes from its first entry, “On Grandaddy’s Knee,” a pleasant rhyming poem that ends with the light touch often found in poems for children: “The story is finished./The clock’s just struck 10./ ‘Grandaddy, Grandaddy,/Please read it again.’”

But Wilson shows other types of poetry in the following pages as well: “New Baby Sleeps” is a simple, observant poem describing its subject, the sort of “captured moment” poem that might be new to many young readers. There are also silly poems about eating watermelon and spaghetti, respectively, which offer primers on evocative words and alliteration. (While parents or teachers will need to point out the proper names of these techniques, even children reading alone will get a sense of the purpose behind the language choices.)

Later, an elegiac tone is struck with “Poppy Died”: “Now, each day after school/no-one meets me/at the gate./Poppy died,/and I walk home/alone.” Even after only “meeting” Poppy eight pages earlier, readers will feel a sense of empathy, and understand the power of a poem to express pain as well as pleasure.

There’s much more brightness than sadness found in these pages, however. Another standout, “My Friend,” focuses on a girl whose friend has moved away. It pays respect to a child’s emotions in such a situation, but ends with a sense of continuation: “Now I have new friends.”

Kenn Yapsangco’s illustrations are an excellent companion to Wilson’s 20 poems, detailing expressions, emotions, and attitudes in vibrant color. In all, On Grandaddy’s Knee is an admirable collection that skillfully relates to children’s lives while showing them ways to address those experiences in verse.

Note: Readers should take note that the book is written with British spelling conventions (which allow for the use of “Grandaddy” instead of the common American spelling of “Granddaddy”).