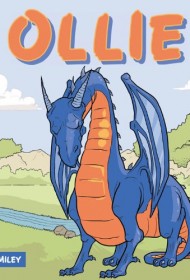 Ollie’s adventures begin when, as a young dragon, he is snatched from his home by a bird of prey. He escapes with some other captives, only to get swept away by a wave. Alone and frightened, Ollie meets Mr. Montgomery, an apparently homeless man, and the two find a comfortable cave in which to set up house.

All is well for a while, but then Sir Henry Milton, a knight determined to slay a dragon, happens upon the pair. Mr. Montgomery helps Ollie subdue the knight, and the three become friends. When Sir Henry departs, Ollie mourns, but Mr. Montgomery consoles him, saying he’s sure Sir Henry will visit again.

Dragons and knights are perennially popular with children, but Ollie has some major flaws that prevent it from capitalizing on that appeal. The lines of verse, though they rhyme, are often awkward and make for difficult reading aloud.

Another serious drawback is the plot, which focuses frequently on Ollie’s and Mr. Montgomery’s eating habits. The story also has some gaps: Mr. Montgomery’s homeless state is never explained, and a group of bats living in the cave is introduced only to disappear completely from the story. The plot is too simple to appeal to older readers, but the text is too wordy for younger readers to handle on their own. In addition, Jingo M. de la Rosa’s illustrations are endearing, but there are only three of them in 34 pages of densely packed text.

In sum, although based on an appealing premise, Ollie is unlikely to engage young readers.