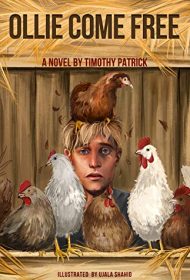 Ollie Buckmeyer survives being struck by lightning, but the once cheerful jokester displays autistic-like symptoms that have dashed any hopes of a normal life. He misunderstands social cues, flinches at touch, and is rigid and fearful. But when Ollie suddenly develops an obsession with drawing, his giftedness is revealed: He can recreate detailed scenes from memory. His parents are overjoyed that he might have a brighter future then they imagined.

But soon his brother Cody grows intensely jealous of the attention his father is paying to Ollie, whose love Cody has struggled to gain. Cody steals Ollie’s drawings to sell them on eBay, and in an effort to make them more valuable, he contacts the media to publicize Ollie’s rare talent. Meanwhile, the Buckmeyer’s ranch is failing, and there’s a tantalizing subplot about a stagecoach robber who buried 1,200 gold coins somewhere on the ranch in 1887.

Patrick has developed a truly original cast of characters, clearly elucidating their complex relationships, and creating an intriguing juxtaposition between Cody, a once-promising baseball player, and Ollie, who against all odds, flourishes. He is deft with description and some passages are stand outs: “…he understood that the difference between action and paralysis, between healthy fear and debilitating panic, is usually nothing more than a deep breath and a step in the right direction.”

The narrative also has a few flaws: Although Patrick ably interweaves several subplots, a couple of minor plot threads seem superfluous and abruptly interrupt the narrative. Additionally, the book’s conclusion has some gaps in plausibility.

Regardless, Patrick so skillfully sustains the dramatic tension that young readers may not notice; they’ll be sitting at the edge of their seats, turning pages.