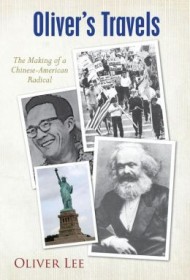 In this memoir, Oliver Lee relates his evolution from a relatively politically complacent immigrant to an anti-war campus activist in the late 1960s.

Born to a German mother and Chinese father in 1925, Lee had lived in three countries and one British colony by the time he reached 21.  In 1946, he arrived in the U.S. and later attended Harvard for undergraduate work and the Johns Hopkins University for graduate study in international relations.

When a favorite professor came under attack by Senator Joseph McCarthy, morale in the department dropped and Lee left, planning to work to ease the burden on his pregnant wife. By then, his political perspective had tilted to the left, so much that when he became a citizen in 1959, he “had seen enough of the dark side of ‘the land of the free and the home of the brave’ to prevent me from becoming overjoyed about becoming a U.S. citizen.”

Lee received his doctorate from the University of Chicago before accepting a teaching position at the University of Hawaii in 1963. His career matured against a backdrop of escalating American involvement in Vietnam. In 1967, although he received a letter of intent to grant his tenure, his advisory role to a radical anti-war student group led the administration to announce his impending termination. For two years, Lee battled back by asserting his right to academic freedom, finally winning reinstatement.

Throughout the narrative, Lee intersperses personal documents and general images of the times, carefully placing his story within the context of the era. Overall, his writing flows, despite inclusion of some minutiae (such as detailing the later careers of some high school classmates) and a brief shifting from the first to third person toward the end.

Overall, Lee provides an interesting perspective on one individual’s coming to terms with tumultuous events of the mid-20th century. His story will especially interest Hawaiians and those intrigued by campus politics during the Vietnam War.