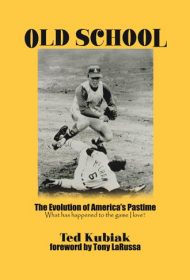 In Old School, former professional baseball player Ted Kubiak reflects on his history with the game while also examining the present and the potential future of America’s favorite pastime.

Major League Baseball fans of a certain age remember Kubiak for playing with the Oakland Athletics (aka the “A’s”) during its run of three consecutive World Series titles in 1972–1974. Later, the New Jersey native managed minor league teams, eventually amassing a 42-year pro baseball career as a player, manager, and coach.

It’s obvious that the game has changed significantly over the past few decades, and arguments over the old vs. the new pervade fans’ conversations. Kubiak mostly sticks to his thesis that these changes rarely make it better. The book’s secondary subtitle—”What has happened to the game I love?” —says it all. Kubiak notes that “the game has gone in a direction that has not produced better or smarter players” and contends that changes to the rules “accommodate and validate the lesser [level of] play.” And that’s only the tip of the iceberg.

Books of this genre tend to bog down with minutiae, and Old School suffers a bit from this issue. But if anyone typically prefers more information over less, it’s hardcore baseball fans. Such readers will appreciate Kubiak’s strong opinions on essentially every aspect of baseball. Regardless of whether they agree with him, they won’t question Kubiak’s authority. He knows his stuff backwards and forwards, and his arguments are well considered and grounded in both data and experience.

Baseball fans will enjoy Old School, a book that combines an involving autobiography with incisive analysis on the unrelenting evolution of the game.