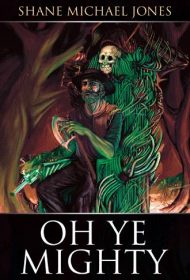 Oh Ye Mighty is a grandiose, adult fantasy novel, set in a world of religious, civil, supernatural and political unrest.

Thomas Belson is a Confederacy citizen serving overseas on the continent of Thyro as Constable of The New Church. Belson has vowed to uphold the church’s gospel of “reason and empathy” by using military intelligence to oust The Old Religion. The Old Religion is an oppressive, demon-worshipping hierarchy of supernaturally augmented priests, championed by former man-of-the-people turned ideological despot, Thaniel.

Having defeated Thaniel and blunted The Old Religion’s influence, Belson is now floundering. Forced to resign his position, he encounters difficulty adjusting to the fragile peace he has facilitated. On his friend’s advice, he returns to the Confederacy to reunite with his estranged family after 15 years, unaware there’s a civil conflict simmering that’s threatening to spill over.

Thematically, the book skilfully deliberates on the corrupting nature of organized religions and displays socio-political insight, touching on themes of racism, social-deprivation, and the psychological aftermath of combat.

It falters, however, in its depiction of Belson. Belson is violent, self-obsessed, and prone to endless meditations on glorious combat. Despite a love of animals and the arts, his vicious temperament, objectification of women, and periodic self-aggrandisement make him an unsympathetic character. Thankfully, a diversity of male characters helps mitigate this, including libidinous monk Captain Seiford, practical-minded antagonist Thaniel, and mystery warrior Ayn-Tuk.

Unfortunately, the narrative adheres to the genre’s most tiresome tendencies in its retrograde portrayal of women. Treacherous lovers, wanton harlots, elderly matriarchs, and despoiled virgins abound. Additionally, lengthy chapters detailing Belson’s heroic past are marred by grandiloquent verbosity, and convoluted battle-scenes leave nothing to the imagination.