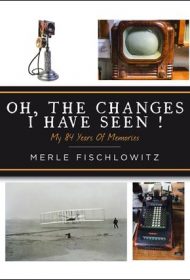 In Oh, the Changes I Have Seen, octogenarian Merle Fischlowitz describes some of the inventions that have taken place since his father was born in 1903. Amply illustrated by photographs from the author’s own collection and from online sources such as Pixabay and Shutterstock, Fischlowitz’s book traces the stages of development in such things as automobiles, phones, televisions and calculators.

Fischlowitz states that he wrote this book for “the younger generation,” and his narrative, for the most part, assumes an unpretentious, personal tone that would appeal to young readers. “In our first house my parents had a big radio,” he writes. “It was three feet tall, stood on the floor, and had two dials that were turned by hand.”

One of the book’s best sequences is when Fischlowitz follows the various incarnations of the phone, from ones with separate ear and mouth pieces, to the modern cell phone. Fischlowitz enhances his descriptions of each mechanical evolution with details that give a sense of the time. For instance, he indicates that in the 1950s, long distance “was billed by the number of minutes for a call, the day of the week, and the time of day.”

Where Fischlowitz goes wrong is when he abandons his conversational voice and pursues technical explanations. His discussion of semiconductors and transistors is more appropriate for adult readers and has none of entertaining wonder that makes other parts of his book shine. The author also gives short shrift to some inventions. His section on the plane moves directly from the Wright Brothers’ airplane to the Apollo moon landing without even a nod to twin engines or jet-propelled crafts.

Finally, the text has some punctuation, spelling and other copyediting errors (e.g., a repeated paragraph on pages 14 and 15) that require correction.

Despite some narrative lapses, this is a wonderful idea. With revision, this book would make a delightful read for the nine-to-13 age group.