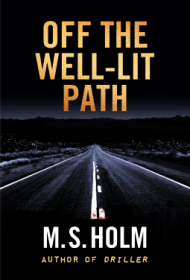 Mexico-based novelist M.S. Holm’s Off The Well-Lit Path is a spare, violent literary thriller that delivers an intense and utterly absorbing reading experience.

The story focuses on widowed ex-soldier and retired pilot Bob Rugg, who is taking his 13-year-old daughter Rose to the beach at Mazatlán. They’re ambushed by a crew of gangsters who abduct Rose and leave Rugg for dead, riddled with bullets, and missing an amputated foot taken as a grisly prize.

As Bob recovers and makes plans to get Rose back, Holm splices in first-person accounts of gang life from Rayo, a teenaged gunman who runs with a crew led by icy warlord El Sin. This humanizing arc gives the story a unique spin as Rayo’s and Rugg’s paths converge.

Rugg is a rare breed, infused with the relentless nature of Lee Child’s Jack Reacher or Richard Stark’s anti-hero Parker but not gifted with their predictable invulnerability. He’s been dropped into a world of gangsters, dirty cops and other shady operators with no help except his U.S.-based sister Sue, a cop who might not be trustworthy, and an old man, Pedro, who takes pity on him.

Holm’s prose is dexterous and reminiscent of Richard Price’s gritty, realistic style. A plane crash is described as casually as crossing the street, while Rugg’s underage daughter is valued more than he is because, “The price of prettiness.” While the plot recalls the movie Taken and other revenge stories, many different genre shades add texture; the novel offers the brutality of action thrillers, the nuanced shades of noir’s troubled codes of morality, and the alternate ethos that a different culture brings to a story like this.

Initially, readers might think they’ve seen this story before and know where Rugg’s arc leads, but they’ll be wrong. By making counterintuitive decisions, hard choices and employing a deftly ambiguous ending, Holm has delivered a bruising but outstanding thriller about how far a father will go for love.