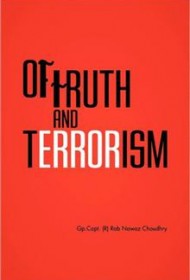 In 2005, Pakistani-born author Rab Nawaz Choudhry published a book titled Terrorism or Awakening about nation states seeking peaceful solutions to killing warfare. Pleased with its reception, Choudhry began collecting columns written over the next five years until they felt bulky enough to publish a second volume.

Reared in semi-rural Pakistan during what seemed to him a peaceful era, Choudhry matriculated to the Pakistan Air Force Academy during 1953 and became a qualified pilot two years later. Developing an expertise in air defense, Choudhry began to grasp the dangers to humankind of advanced weaponry.

After the terrorist attacks of September 11, 2001, Choudhry decided to devote the remainder of his life to opposing war while suggesting solutions to hostilities surrounding the existence of Israel, ongoing hostility between Pakistan and India, invasions of Iraq and Afghanistan, and the proliferation of nuclear weaponry.

Of Truth and Terrorism opens with a letter to “common Americans,” suggesting less aggressive foreign policy incursions. “Your security lies in making friends around the world, not creating enemies,” Choudhry writes. “Today, 90 percent of the Third World countries people [sic] dislike America. That is a point to ponder.” Although the philosophy of the letter can be considered eternally timely, Choudhry published it originally on June 28, 2006. As a result, some of the references circa 2012 are outdated, especially the direct addressing of some points to President George W. Bush.

The remaining 52 essays don’t hold together well as a book. Many contain outdated references, and they aren’t organized chronologically or by subject matter. The most compelling pieces address corruption within the Pakistani leadership, offering flashes of insight for Western readers due to the knowledge Choudhry gleaned from his Pakistani childhood. Unfortunately, even the Pakistan-related essays tend to contain outdated information and fail to demonstrate a strong command of English language nuances. As such, the book, while promising, is more disappointing than enlightening.