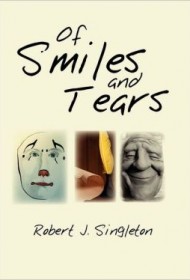 The cover on Of Smiles and Tears depicts the title in literal terms, which signals the simplicity of the poems inside. This volume by Robert J. Singleton consists of 142 pages of brief prose with poetic interludes.

The subject of most of Singleton’s work here is love and the “lady” who is the object of affection. Singleton’s sincerity is unmistakable, and readers would have to be made of stone not to be touched by the obvious affection displayed. Whether biographical or not, we imagine a man deeply smitten, seemingly for decades, by his “lady,” whom, perhaps, he loses in the end. We imagine that his long affection has led to this series of sweet expressions on predictable subjects such as beauty, roses, bluebirds, gifts, love and love again.

Unfortunately, such devotion isn’t always enough to overcome the obstacles presented in the writing itself. Stylistic errors, including typos, abound. Even on the back cover, sentences fall apart or seem jammed together. And the content itself is rarely compelling. Singleton’s work has a kindly quality that substitutes for physical passion, a deep appreciation of a woman who has hung up clothes and kept house for decades. What wife wouldn’t want a love poem inspired by her kitchen’s sparkle? But his repeated odes to his domestic goddess vary little and will produce a consistent “that’s nice” response in the reader.

At times the relationship in this book will strike readers as refreshingly innocent, the way we hope and imagine our grandparents felt for one another. At other times, overused language and simple, restrictive, rhyme schemes kill any subtleties the poems might contain. In short, while some folks who see themselves in these poems will smile and share tears–undoubtedly the author’s aim–Of Smiles and Tears lacks the complications that might hook more sophisticated poetry readers.