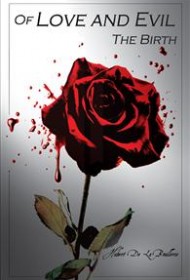 The Exorcist meets The Social Network in this imaginative, well-written and grotesque story involving evil, politics, technology and historical conspiracy by film director Hubert de La Bouillerie. If readers can stomach the flagrant violence and buy into its fantastic tapestries of malevolence, there’s a compelling yarn of faith-based horror to be had.

At the story’s start, Brooke Mirande has just inherited full control of her mother Helen’s multi-media empire, Global Multi Media News. She’s deep into negotiations for a merger with Robert Redman, the inventor of a new social media game and her former lover.

Soon, the story flashes back to 1949, when Sheriff Sam Chrichlow discovers the half-dozen victims of a ritual murder in Zion National Park. Flash forward to present day, where Father Timothy Lesher has committed a nearly identical crime in Santa Barbara.

As if all that isn’t enough to digest, then things get really weird. When Brooke’s sister Karen is nearly immolated in a car crash, she inexplicably regenerates as a vicious, demonic version of her mother, Helen. “It’s about the resurrection,” she croaks. “How’s that? The coming of the Anti-Christ, of Satan, of Lucifer, of the Prince of Darkness, of Mr. Scratch, whatever you want to call him. He doesn’t care. If you call, he’ll answer.”

As a conspiracy unfolds –involving a long-buried pact between the Devil and Lucrezia Borzia– Sam Chrichlow resurfaces, as does a book of prophecies written in the blood of Lucifer. Meanwhile, the blood flows and the sense of dread deepens with each flip of the page. From ritual sacrifices to the eventual demonic possession of Redman’s online game, it’s all bad news for Planet Earth.

The book is fast-paced and written with gusto, but readers be forewarned: the brazen carnage, violent murders of several characters (one of the best characters experiences vivisection by bulldozer early on) and murky resurrection conspiracies may test the palate of even the most hardcore horror fans.

Author Platform: The author has edited over 30 feature films, including Woodstock and The Witches of Eastwick, and has directed films and television shows, including Boston Legal.