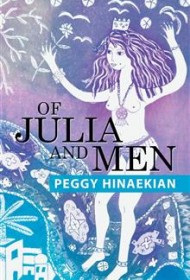 In this spicy romance, Julia Chamoun grapples with a moral dilemma when she lusts for two very different yet equally exciting men, knowing she must hurt one of them in the end.

Julia, who was raised in 1950s Egypt, is expected to marry, forego a career, and become a mother. Flaunting convention, she chooses her own husband and moves to the U.S., but soon she tires of her husband and the lackluster sex. They divorce and she moves to Geneva where she becomes a successful artist. Despite her bed-hopping and pick of men, she yearns for “The One,” a man to marry who will fulfill all her sexual needs and still respect her independence. When she meets Jean Claude du Barry, 15 years her senior, she believes she has found the right man – until the younger, sexier Luis Ortega shows up to spoil her plans.

The book features erotic, tastefully rendered sex scenes (example: “His tongue and fingers caressed her sex languorously as he watched the pleasure in her eyes”). It also has all the requisite elements of a fantasy escapade: exotic locales, a relatively likeable heroine and ripped men with plenty of money for the good life. The writing is hypnotic, lulling readers with its rhythmic style and repeated ideas. (In one sentence, for example, the author writes: “But she could not forget Jean Claude. He was always present. Her steady, strong, trustful Jean Claude….” In another: “With Jean Claude, she felt on steady ground. He was like a rock…”)

There are minor problems: The narrative features some jarring anachronisms (such as calling Julia a “cougar” years before the term existed) and undeveloped plot points (including the subplot in which Julia tries to get her father out of Egypt). But these aren’t critical. The book features a compelling pace and hot sex scenes — and romance fans will find themselves racing to learn whether maturity and steadiness can ultimately triumph over youth and excitement.