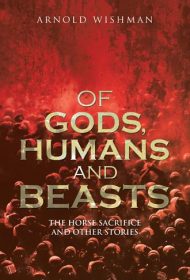 In Of Gods, Humans and Beasts, author Arnold Wishman aims to satirize humanity’s obsession with religious superstition and violent deities.

Wishman is an equal opportunity provocateur in this short story collection: No major belief system is spared. A self-identified agnostic, he quotes liberally from the Bible, Koran, Mahabharata and other religious sources to illustrate his viewpoint. Venerable modern-day sages such as Gandhi and Thomas Edison are also quoted to emphasize points.

The stories are generally short, but often ramble. For example, in “How Ramji Got the Beard” —about a film producer who needs a local kingpin’s approval to include an accurate portrayal of facial hair on one of his characters— the author meanders through a long setup, offers word definitions and political minutiae, and pokes at differences among religions before ending on a somewhat flat note.

The author warns that some stories will be gory and keeps his promise in his excruciating description of one unfortunate monkey’s torture in “A Sam D’Cruz Horror Story,” as well in the titular tale of a horse sacrifice. Most stories, however, are brutality-free and display the author’s attempts at humor by fictionalizing what he perceives as inconsistencies in major religions. For example, he concentrates several stories on what he sees as the absurdity of a savior of mankind who cannot save himself from crucifixion

Wishman prefaces his book by encouraging all who question whether he has “blasphemed a scripture or a sacred episode described in it” to re-read that part of scripture. He also dedicates his work to those he feels have suffered in the name of faith or for their lack of it. In all, the book is squarely an opinion piece.

Those who have a low tolerance for blasphemy may wish to steer clear, since the irreverence comes rather close to sacrilege. However, those who are more open-minded or secure in their own beliefs will find this a largely provocative, amusing read.

Allso available as an ebook.