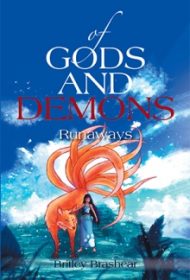 Of Gods and Demons: Runaways, is a dark fantasy that features summoners, demon hybrid creatures, demon gods, sirens, and corrupt humans in a series of bloody battles for power.

The main character, Saige, is shocked to learn that upon reaching her birthday, her rapist father (Sellpoint City’s governor) has arranged to have her sacrificed to the demon gods so that he can gain more power. Joining with her magically bound Anarygu (a mythical demon creature that is half human and half human-devouring demon), they run away, narrowly escaping the city.

Hunted and tormented by demon gods, soul-eating sirens, a rapist priest, and another young woman named Reilyn, whose parents abandoned her and left her to die, Saige travels from city to city with her Anarygu to fulfill her destiny, rather than die as a human sacrifice. But unknown to Saige, Reilyn has been coerced by Saige’s father to retrieve her for the sacrifice ceremony.

Each chapter is filled with various scenes of throat-slitting, entrails-eating, face-ripping violence between humans and mythological, shape-shifting creatures. Story elements and characterization are minimal, while bloody confrontations are maximized. Numerous unnecessary characters and a complicated backstory about 13 demon gods can be difficult to follow at times.

In addition to extreme violence, problems with writing style appear throughout this brief book. The story sometimes abruptly switches from Saige to Reilyn without transition; a first-person reference intrudes on third-person narration; text on pages 25-28 is repeated verbatim on pages 28-31; and awkward sentences can impede meaning. For example: “In an hour or so, they were steering clear of the funeral pyre they had left her Anarygu and Bella herself at while letting the fat man to rot.”

Overall, this is a challenging read. The story could be greatly enhanced with careful editing and fuller story and character development, which would allow readers to feel emotionally invested in the story’s outcome.