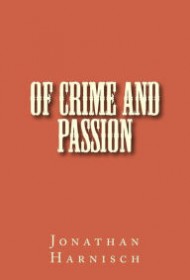 Jonathan Harnisch is at his best in bruising, direct confrontations with schizophrenia, PTSD and the other maladies that afflict him. The 803-page Jonathan Harnisch: An Alibiography and his essays on mental illness are affecting cries of a wounded heart.

This slim novella is less successful. While the prolific New Mexico writer’s trademark empathy and emotion are on full display, Harnisch here reveals an uncertain grasp of character development and weaknesses for stilted diction and peculiar story flow.

His protagonist is a scheming poor boy named John Marshall (he may or may not have been born “Juan Marcinel”) who sets out to take revenge on the rich through a series of seductions in wealthy households. Harnisch sheds little light on John’s grievance (the moneyed Roman and Sinclair families are actually quite good to him), but he does carry around a picture of Che Guevara and claims, with no evidence, to live by “revolutionary philosophies.”  But he also inexplicably spouts Bible verses in fluent Latin and is impressed by opulence: “I stare in open-mouthed awe at the palatial town home.”

Harnisch’s language ranges from the archaic (“My father gives us leave until supper” to the outlandish (“You are my master, I am your slave”), and his plotting is often puzzling: A rich patron John has gravely wronged offers him a business partnership; a mistress he shoots in a church takes no offense whatsoever.

Harnisch has indicated that he writes only when sleepless and symptomatic. As a result, his demons are often evident: A full,12-page chapter outline of the book precedes the actual text, and the obsessive interruption “smoke break” appears again and again in the latter pages.

Jonathan Harnisch is a gifted writer. Unfortunately, this is a lesser effort.