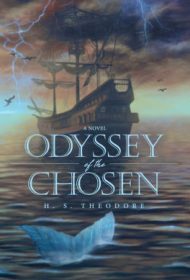 Reminiscent of Harry Potter and The Chronicles of Narnia, H.S. Theodore’s sci-fi/fantasy Odyssey of the Chosen incorporates fantastical creatures, children destined to save mankind, and faith above all.

When Sam takes his children (surly 17-year-old Rachael and timid 14-year-old Jayden) on a sailing trip, the sea suddenly turns violent, throwing them all overboard. Sam’s gone; however, the teenagers realize they’ve been rescued by an unmanned, 15th century Spanish galleon. Shortly thereafter, the kids are separated; sweet Jayden commits to fighting to save humanity, while troubled Rachael is lured to the dark side, commandeered by evil Ayin-Ra.

Just like this clash between good and evil, the novel exhibits both good and questionable elements. On the upside, Suspenseful, well-described battles, clever twists and a dazzling array of supernatural creatures underscore this high-adventure tale. It’s wickedly creative. Threatening armies are reduced to harmless 2-D cutouts; cuddly rabbits turn deadly; a villain transplants false memories into an unwitting mind.

However, sometimes it recalls Harry Potter a bit too much: “Dark Lord”/”Dark Arts”/”Dark Armies”; magic similar to Polyjuice Potion (characters assume physical appearances of others); and frequent spells intoned in otherworldly languages. And while Jayden’s transition from hesitant teen to assured leader works well, Rachael is one-dimensional; Untenably nasty, her character cries out for more range.

Other issues also impact effectiveness: The novel is set in 1809, but characters speak in modern vernacular, (“Get real,” “What’s the deal?” “Wake up and smell the coffee”). Ayin-Ra’s first-person monologues (speaking to no one), merely summarize events that already occurred. And although the world-shaking conflict is between good (High King Taldegon Re) and evil (Ayin-Ra), Taldegon is neither seen nor heard. Instead, his top general is at the helm. With one power absent, the story is diluted.

Finally, the font type is so small, a magnifying glass is necessary, and the promised final resolution merely serves as a lead-in to some future sequel—an unwelcome maneuver that, alas, even evil Ayin-Ra would appreciate.