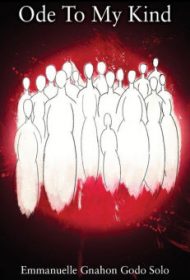 With her slim poetry book, Ode to My Kind, Emmanuelle Gnahon Godo Solo gives voice to women’s feelings and issues.

Each poem represents a different aspect of womanhood.  In “You Mean Everything,” for instance, Solo explores the way women take on roles (“mother, sister, friend/ […] Counselor, comforter”).  In “Sitting Pretty,” Solo notes the vulnerability that hides behind the façade of the perfect outfit.  “Dressed to impress […]/ Sitting pretty, behind is a good mess.”

Although the poems target women, many of them, as Solo notes, express “sentiments that can be felt by anyone.” Most of these gender generic verses involve the fruits of introspection. Purpose, authenticity, and identity are recurrent themes in these poems. “Who knew,” she asks in the poem “Changes,” “I would never really know myself/ Waking one person and going to sleep another.” “Purpose,” she declares in a poem of the same title, “is our reason/ […] is our religion….”

Solo’s poems are short—some only four lines. While she makes occasional use of rhyme and rhythm, her poems aren’t wedded to any particular structure. Their strength lies in their sincerity. In “Let’s Clear the Mess,” for example, she compares humanity to a choir that needs to bring the members’ diverse vision into a harmony that can “produce one powerful song.”

Most of Solo’s poems, however, are too abstract to create a powerful effect.  For example, in “Divided,” she writes: “I hate being compared to you sometimes./ It is strange and uncomfortable.” “Life Lessons” declares: “No picture or sound/ could ever depict/ The entirety of my emotions.” In general, the work lacks poetic devices, such as strong imagery, metaphors and other engaging word play. Additionally, Solo’s meaning is sometimes obscure. In the abovementioned “Divided,” for instance, she never clarifies what that “one thing” is that “belongs to me and not you.”

While Solo presents ideas that will appeal to women readers, her poetry requires greater development and poetic flair to truly resonate.