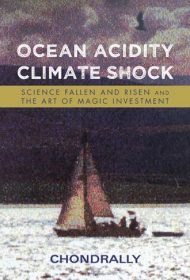 One of the most controversial topics the world over is climate, from its current status, to the debate over whether or not the earth is dashing toward catastrophic destruction, to whether humanity can do anything to affect it at all. In Ocean Acidity Climate Shock, author Chondrally squarely falls into the camp that believes we are on the brink of disaster and writes that he has determined a remedy.

Unfortunately, the author introduces his thesis in a cascading stream of consciousness, invoking his opinions not only on scientific principles that are tangentially related to climate issues, but also his thoughts on misogyny, religion, alien life forms, and pop culture television—to name a few. This chaotic style then permeates throughout his more scientific presentations.

His research into oceanic anomalies focuses on the acidity and pH balance of the world’s oceans. Chondrally believes that as the ocean becomes saturated with carbon dioxide (CO2), it has no recourse but to release it into the atmosphere, thus detrimentally affecting the climate. His solution is to develop a methodology—perhaps a mechanical one—of extracting and safely dispersing and/or chemically changing the CO2, eliminating the threat.

Ostensibly to back up his proposal after his proposed solution, the author spends 60 pages listing the average number of earthquakes for many countries, at which point the remaining half of the book is a computer program that calculates variables of parts per million (ppm), presumably of CO2, at sea level.

The author is addressing a very timely topic, and readers interested in climate change, ranging from the casually curious to those sincerely interested in finding a solution, may be tempted to pick up this book. However, the challenging presentation, along with a severe deficiency in scientific coherence, makes this a dubious contender for study on the topic.