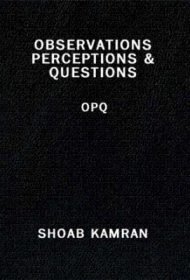 With Observations Perceptions and Questions, Shoab Kamran delivers 16 opinion pieces elucidating his views on a range of topics, from the “rules” for marital relationships to the best way to levy taxes in America.

The title of each piece is a question, such as “Are Humans Still Evolving?” The essays then begin with an “Observation,” a statement setting forth the parameters of the issue, followed by a section labeled “Perception,” which is comprised of the author’s viewpoint on the subject. Kamran concludes each item by essentially asking if the reader, nation, or mankind (depending on the topic) can follow his prescriptions stated in the piece.

There’s no uniting thread throughout these disparate essays except, occasionally, the author’s stance as an outsider regarding the American milieu. Kamran never specifies his country of origin, but he drops hints: His “mother tongue” was “Punjabi,” and his “ancestral language” was “Kashmiri.” Thus, he opines with authority in his essay, “Is English the Universal Language?” that English is the easiest language “to learn for communication in general.” And his unique perspective lends him the credibility to assert in one of his published letters-to-the-editor at book’s end (photocopied here), that “there have been wrong impressions being given [sic] on the aftermath of religious violence in India….”

Elsewhere, he argues only with the authority of any other American, advocating, for instance, for a simplified tax code or for eliminating Daylight Savings Time.

Kamran’s voice is upbeat and constructive, but his opinions ultimately lack substantiation. For example, he states that “60% of the population…is of normal average intellect, and ambitions [sic],” without supplying the source for this fact. His text, moreover, is difficult to read because of its many grammatical errors (particularly the absence of articles and parallel sentence construction). And the range of topics makes it difficult to pinpoint an appropriate audience.

Regretfully, despite its constructive nature, this book requires editing to attract a wide audience.