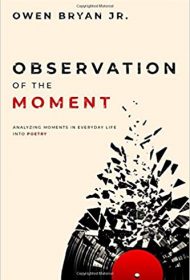 Owen Bryan Jr. values poetry as “an outlet to [his] everyday life,” and likens the poems he writes to therapeutic sessions. He offers the poems in Observation of the Moment not as mere records of his struggles in life, but as accounts with ideas and perspectives that may help a fellow struggler. “I told Dad that through my poetry writing, I was beginning to understand how events in my life were affecting me. I told him I was sure I could help others in similar situations,” he writes in his Introduction.

The poems in Bryan’s book work through a range of topics, from depression and anxiety and the creation of an authentic self, to “the metaphysical [sic] of attracting money.” Bryan follows many of the poems with back stories and references to his sources of inspiration (i.e. Toastmasters, hip hop, motivational speakers, Japanese anime and Epictetus).

The back stories, where readers learn, for instance, how the author’s parents taught him values, are related in a clear, congenial style, in sharp contrast to the poems which are highly abstract and introspective. The poems are written in free verse and often in a kind of puzzling, kaleidoscopic logic where disparate ideas are juxtaposed and lead to a conclusion.

For instance, “When the Beta Becomes an Alpha,” combines “understandings of one’s surroundings” with “soul transfiguration,” “expensive taste,” a boy becoming man, and upward and downward spirals to lead to “getting out [sic] the rat race” and, finally, “to live out your dreams/ And not somebody else’s.” Most readers will find this oblique approach, coupled with the frequent use of nonfigurative language (“Gratuitous Maximus/ Vivid linguistics apathy, foretold/ Languish from cognitive dissonance”) off-putting.

Bryan also sometimes misuses words (“Can be a clout chase, for fame and notoriety”) and has trouble with subject/verb agreement.

Such issues greatly impact the poetry’s ability to achieve its altruistic aims. As such, Observation of the Moment, is unlikely to attract a wide readership.