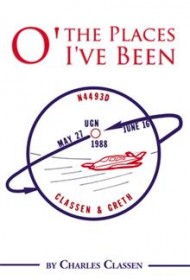 In 1988, Charles Classen and his friend Phil Greth set a new speed record for single engine airplanes (westbound), flying a 1955 Beechcraft Bonanza around the world in a little over 20 days. This is a recounting of that journey.

As in many achievements, there was a false start, in 1985-86. Classsen had planned to go on a group flight with other pilots, but cancelled the trip the night before takeoff due to insurance problems. However, planning and research for that effort paid off in their second attempt chronicled here. From May 27 to June 16, 1988, they flew from Waukegan, Ill., to San Jose, Calif., on to Hawaii, the South Pacific, Australia, Indonesia, Singapore, India, Dubai, Egypt, Spain, the Azores, Canada, and back to Waukegan. Their new world speed record stood for 20 years.

How does one plan such an undertaking? Very carefully. It is salutary to view their checklists and photos of the equipment and supplies for both pilots and aircraft.

The writing here is perfunctory, with the exception of the sections on the pilots’ misadventures in India, where they became unintentionally involved in a violent political situation, and in Egypt, where official hands were out at the airport for exorbitant “fees.” Often each chapter begins or ends with radio chatter between control towers and the pilots. This is sometimes difficult to follow because it’s not always clear who is talking. A content editor could have smoothed out the writing and brought some of the scenes more to life. A section at the back of the book that describes the narrative’s purpose would have been a useful introduction.

Spelling and punctuation errors are common, including: “teaming” for “teeming”; “waived for “waved” and “insight” for “in sight.” In addition, maps would have been useful — and interesting — in order to follow the route, as would photo captions.

Much of the book is highly technical. But then, pilots are always ready for more “pilot talk.” Accordingly, this book is for pilots, wannabe pilots, and private aviation buffs, rather than general readers.