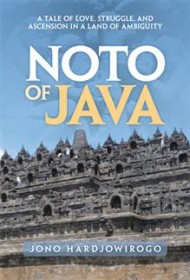 Jono Hardjowirogo’s Noto of Java, begins in the 1960s social and political unrest of Indonesia, where the mostly Muslim Javanese tribe is dominant. In 1965, protagonist Noto, comes with a mysterious letter of introduction to live with Javanese relatives in Solo after his parents have been killed in a melee between the Nationalist Party and the Communist Party. Dharmawan, a distant cousin, takes Noto as a brother and serves as narrator of the story.

The two, both age 13, live parallel lives, from being circumcised together so they might “keep each other company while recuperating” to writing letters as they pursue education in different cities. Noto’s true identity is, however, a mystery, even unto himself.

Dharmawan tells readers of Noto’s life up to his mid-20s and reveals the “mystery of Noto” as it slowly and beautifully unfolds. Hardjowirogo skillfully manages the external tension of the mystery of this novel. Noto’s trajectory, on the other hand, reveals little internal tension. It is ever upward, involving only minor uncertainties and setbacks and making this a tale more of legend than of real life. He excels in all school subjects as well as chess, self-defense, dance, religious study, friendships, and work. His character is flawless and his attributes are a model of curiosity, intellect and respectfulness.

The story is richly interlaced with cultural details of the history, food, mythologies, traditions, and rituals of the Javanese as well as details of the social, political, and religious factions within the whole of Indonesia. Unfortunately this work has many syntactical, typographical, and/or usage errors, and is in serious need of editing.

Even so, the book is an engaging and memorable read. It is to be followed by two sequels: Noto of Java: the Promise of New Mataram and Noto of Java: The End of Days.