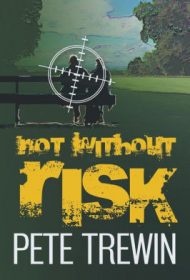 Pete Trewin taps into his own expertise in “regeneration,” the UK’s lingo for urban renewal, in this twisty, unhurried thriller set in the grim decay around a suburb of Liverpool.

Our everyman protagonist is an older fellow named Martin Bennett, a regeneration specialist with a company called Development Solutions. We meet Martin at an unsteady time as he visits his doctor following a mild stroke. While at the hospital, he bumps into John Hardin, once a mate of Martin’s going back decades, before a fraught personal history involving a betrayal and an affair ended their friendship and association on the professional climbing circuit.

Then something strange happens: As Hardin heads down an escalator, Martin sees a hooded figure clap his friend on the back, after which Hardin promptly dies of a heart attack. When Hardin is cremated and, for all intents and purposes wiped from the earth, Martin feels compelled to dig deeper.

Soon another old friend, climber-turned-alcoholic Lester Adams and a pair of policemen appear with inquiries and slim clues about Hardin’s mysterious life and suspicious death. With the help of Jane Trevelyan, assistant to the city’s corrupt mayor, Martin investigates Hardin’s double life, which leads him to a shady redevelopment scheme and a host of collaborators and villains, including a pair of dirty cops and a violent gang of thugs.

The seemingly unending chain of schemes, suspects, futile investigative alleys and plot reversals can seem overwhelming at times, while Trewin’s sequential storytelling style and an abrupt, anticlimactic ending robs the story of some potential suspense. But while the pace can be slow, these characters are rich in charisma, notably Martin’s quiet nobility and his friends’ gallows humor.

In spirit, Trewin’s Liverpudlian noir is cousin to writers like Ian Rankin and Henning Mankell, as well as slow-burn British thrillers like Brighton Rock or Get Carter. Readers who get hooked by its retro charms are likely to keep turning pages until the end.