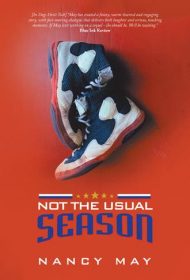 Going into the school year, Ben’s biggest goals are to win the state wrestling championship and to get accepted to the Naval Academy. Ben also begins dating his crush, Talia, encouraged by his popular teammate and best friend, J.T. When new student Jordan becomes the first-ever girl to join the wrestling team, Ben and his friends are forced to reexamine their preconceptions. This minor upheaval foreshadows what will be a year of loss and growth for Ben.

May’s characters are complex, and she doesn’t shy away from their rough edges. For instance, Talia is sometimes petty and insecure due to an unhappy home life, and Ben blithely admits that his sister will be the one caring for their autistic brother in the future. May is also compassionate in her portrayals of adults and their problems, such as the wrestling coach’s increasing burnout and Ben’s mother’s grief at the death of one of the family dogs.

There is room, however, for even better character development. For instance, Ben refers a few times to his bookishness, but readers only learn about his reading tastes late in the novel. And Jordan refers to wrestling as her God-given calling; a deeper exploration of her faith would make her a stronger character.

Readers should be aware that a transgender minor character (a wrestler competing against Jordan) is portrayed as a cheat and a poor sport. Introducing a minority so briefly in such a negative light may rub some readers the wrong way.

Overall, greater depth would help the story better stand out in the crowded YA field. Still, Not the Usual Season combines humor, romance, sports action and emotional turmoil in a way that will appeal to teens.