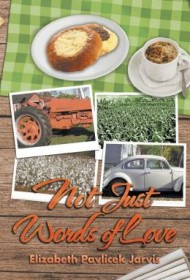 Elizabeth Pavlicek Jarvis uses her experience growing up on a cotton farm in Texas as the setting of her first novel Not Just Words of Love.

Olga Orsak returns to her family’s cotton farm for the summer of 1968, following her first year of college. There, she falls into the daily routine, helping her father prepare the cotton for picking later in the summer. She also takes over the care of her special needs, much younger sister, Agnes. One day Olga’s older brother asks if his friend could work at the farm, and John Cove arrives soon thereafter.

A survivor of the raging Viet Nam War, John is quiet and a hard worker. Olga is at first rude and standoffish to John, finding his presence unwelcome. The two gradually warm to each other, and eventually they become friends. A hint of physical attraction emerges that neither seems comfortable with, particularly Olga who also is pining for her college boyfriend.

Not Just Words of Love has potential, considering the era in which it takes place and Olga’s attraction to two very different men. It also has one poignant plot twist. But Pavlicek Jarvis rarely takes Olga to satisfying places. Many times, Olga could make choices that would move the story in interesting directions, especially when it comes to the two men, but the story merely drifts back to daily life on the farm.

And Olga’s emotional outbursts while in John’s company feel juvenile. For example, while she and John are working in the field one day, he makes a quick comment about her having work to do. Angered, she throws a clod that injures him.

Pavlicek Jarvis writes vivid, thorough descriptions about the farm and the strenuous labor involved. But the novel feels like little more than the story of a young woman spending one summer working on her family’s farm. As a result, it’s unlikely to find a wide audience.