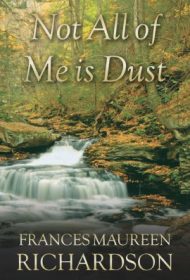 Frances Maureen Richardson’s finely crafted novel Not All of Me is Dust follows the spiritual journeys of three siblings, each with their own paths and struggles.

Kathleen and Stephen Engle are teens; the youngest, Clare, still a child, when their mother dies in a car accident. The three are close, with Kathleen acting as Clare’s surrogate mother and Stephen, something of a literary mentor, encouraging his younger sister to “Read, Clare, read. Fill your mind with the beauty of words…”

As Stephen hoped, Clare “fell in love with language” and is particularly taken by the virgin martyrs of the first centuries after Christ, as well as the North American martyrs. By contrast, Kathleen is described as a “preoccupied, indifferent, uninspired learner,” while Stephen is a “thoughtful, attentive, dazzling student.” A college senior, uninspired by his study, Stephen stops by the Jesuit residence hall, and discovers his calling to become a Jesuit. Likewise, Clare aspires to a life inside the church. Only Kathleen plans for a secular life. But each of the siblings encounter trials with the power to change their paths.

This is a story grounded in knowledge of literature, history and politics, particularly as they relate to religion and spirituality. The title takes its name from the poem by Russian poet Alexander Puskhin, and the story references Holocaust survivor Viktor Frankl, writer Gerard Manley Hopkins and others.

The writing is sharp, the characters human with their share of weaknesses and even secrets, and the plot is intriguing, taking a turn in a recent African civil war. Anyone seeking an intelligent, well-informed and absorbing story layered with meaning is sure to find this a satisfying read.