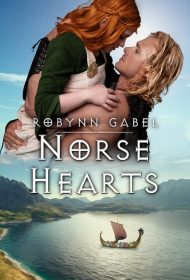 Norse Hearts is a historical saga of love, war, and power dynamics in the early Viking age.

On the night before her wedding, 17-year-old Angles woman Seraphina is kidnapped by Viking invaders, led by a hardened warrior named Einar, and taken to their northern homeland to be held for ransom. After an initial escape attempt, Seraphina remains certain that her betrothed, Cecil, will rescue her. To her shock, she soon learns that the Vikings were actually hired by her fiancée to kill her and are only keeping her alive to collect their ransom or sell her as a slave. An even greater surprise is that Seraphina finds herself developing feelings for Einar, and he, in turn, seems to be developing an attraction to the fiery young woman.

The novel’s main draw is its strong main female character. Seraphina pulls off the almost-impossible feat of being a tough female lead while maintaining the morals and practices of the novel’s 8th century setting. Yet this only makes it more disappointing when the supposedly heart-warming forbidden romance between two people from entirely different cultures instead comes across as something like the Stockholm Syndrome, particularly since Seraphina is not only much younger than Einar but also his captive.

Einar’s violent, brooding, and highly misogynistic attitude doesn’t help. Seraphina is assured of his alleged good side by other characters, rather than seeing it through his actions. Despite his claim to love Seraphina, his aggressive behavior, such as spanking her, forcing kisses upon her, and even cutting off her dress at one point, are more disturbing than romantic. While these issues can perhaps be explained away as an attempt to adhere to historical accuracy—and the novel is clearly well-researched—it still leaves a bitter aftertaste for modern-day readers.

Some fans of historical romance may be able to look past these elements to see an epic love story, but unfortunately, many will simply be turned off by the novel’s central relationship.