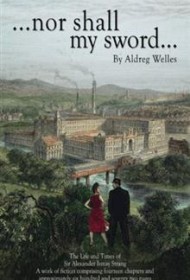 …nor shall my sword… follows Alex Strang, a protagonist who is raised by his spinster aunt after being orphaned when his mother dies in childbirth and his father perishes at sea during World War II.

The reader watches Alex grow up and become an apprentice engineer as a teenager, eventually advancing to the head of Walbank Holdings, a major player in the British industrial world. The novel also follows his lifelong friendship with Quentin Taylor, who as the boss’ son was poised to take over Walbank Holdings but instead opts for a life as an Anglican priest. As Alex lives his tycoon’s life happily, as a master of the universe, we see through his eyes the tumultuous events of the latter half of the 20th century in Britain, largely the friction between the unions and the changing landscape of British manufacturing.

Although the book is rife with potential intrigue – Quentin Taylor marries Alex’s childhood sweetheart, and Alex’s young secretary’s father organizes a strike against the company – author Aldreg Welles skims over these issues rather than mining them for their potential. Instead, the novel contains mundane details about business and the characters’ lives. The book is clearly written from a perspective of Thatcherite conservatism, with union leaders and striking workers portrayed villainously. Alex’s laissez-faire capitalist beliefs are somewhat countered by Quentin’s religiously motivated social conscience, but again, Welles doesn’t delve into their opinions sufficiently to be meaty for the reader.

Overall, …nor shall my sword… has potential as a novel but reads as an early draft. If the author were to cut much of the material and expand the areas mentioned above, the story could be made richer, more nuanced and more engaging to a general audience.