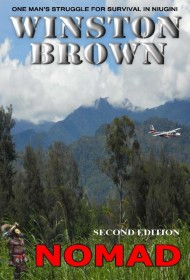 Aviation buffs and armchair travelers are likely to enjoy Winston Brown’s tale of adventure and treachery in exotic Papua New Guinea – so long as they’re not looking for crisp, original prose.

Brown, a pilot and businessman, presents Nomad as fiction, but the author’s resume is so similar to his hero’s that it appears to be a thinly veiled memoir. His protagonist, New Zealand-born John Richards – “Hairy” to his mates at the landing strip – is a classic seat-of-the-pants flier and up-by-the-bootstraps entrepreneur. After a 1970s stint as a bush pilot and instructor in the storm-wracked New Guinea skies, Hairy, his Chinese-New Guinean wife, Maree, and friend Ralf boldly start their own airline, using the new Australian-built, twin-engine Nomad as a workhorse. Before long, Richards’ resentful aviation rivals – aptly dubbed “Little Hitler” and “DTs” – try to destroy him, going so far as to make a grisly murder attempt. Left for dead, Hairy survives nearly fatal brain damage through some exceptional medical treatment.

All this happened to Brown, too, and Nomad reads as much as an act of vengeance against old tormentors as a celebration of success. So much the better: Brown’s obvious passion enlivens a story of derring-do and danger aloft. The book’s travelogue elements (colorful tribesmen, boozy nights at the club, gorgeous views of the jungle) are entertaining, and propeller-heads will appreciate the tech talk about various aircraft.

But unfortunately, the narrative is disorganized, there is far too much dull business-plan talk and the writing is frequently sloppy. Here’s a sample when Ralf, one of the characters, returns to Australia for a holiday: “Sydney, being home, his (Ralf’s) little black book contained the names of many girls with whom he would desire to renew their acquaintance.”

In all, this might make an exciting movie thriller – except for nearly 300 pages of prose that almost never takes flight.