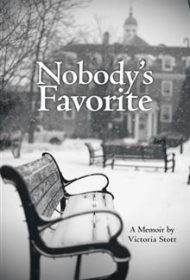 In Nobody’s Favorite, Victoria Stott writes with chilling immediacy about the torment she suffered throughout childhood at the hands of her older brother and its aftermath.

Adopted at age 18 months by a Canadian couple, Stott and her brother (adopted four years earlier) lived on a military base. Unbeknownst to Stott, her father worked undercover for military intelligence. What she did come to learn was her brother’s loathing. She remembers him taunting and hurting her at age 3. His assaults turned sexual when she was 8 and continued until she left home at 16.

Stott realized later that her brother’s behavior went unacknowledged because her father’s job demanded a facade of normalcy. She alleges that even her brother’s attempted rape of a neighbor was covered up by base authorities.

Once Stott leaves home, her focus shifts from the abuse to its aftermath. At 30, she sought to understand and heal her past. “After looking it up, I had to face the fact that what I experienced matched the definition of torture.”

Stott tells a sad and worthy tale, but her deeply affecting memories are diluted by a fragmented, rambling narrative. For example, discussing sexual dysfunction in childhood rape victims, Stott writes: “I’m lucky not to have gone down the path too far with sexual self-harm. I did penetrate myself once with an inappropriate object. No, I don’t want to tell you about it.” One paragraph later, though, she does tell, noting that “I used a broom handle the first time.” This is soon followed by: “Writing that line reminded me my mother thought the use of tampons meant a loss of virginity.” Much of her story is obscured by writing that’s similarly unfocused, rife with sentence fragments, misused punctuation and confusing dialogue.

Weaving such horrific experiences into a cohesive narrative can be a difficult task for a first-time author. Stott’s story is worth telling, but requires revision to bring it vividly and coherently to life.