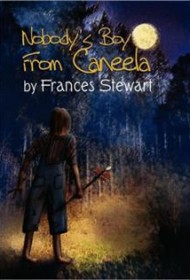 In Frances Stewart’s young adult novel, 14-year-old Rance is on a quest, though he doesn’t know it yet. Abandoned as a baby, he was taken in and raised by Monk, who treated him like his own son. But now it’s time for Rance to learn where he came from. While hunting in the woods, he’s led to clues that may unveil his past and shape his destiny in ways he could never have imagined.

Set during the Great Depression, Nobody’s Boy From Caneela is a smart tale, full of adventures, ghosts and secret places. Rance has to work hard and hunt so that he and Monk can eat, but he finds many simple pleasures in his life as well. He has a female best friend, Torrey, and is a crack outfielder in neighborhood stickball games. Rance is a likable character, and we want him to be happy and grow beyond being “nobody’s boy” into his own identity.

Despite such advantages, the book suffers from several flaws. It needs editing for consistency; for example, there are times when the dialogue jumps from standard English to colloquial within a single sentence (using “dat” and “that” together, for example), and while the characters are well-drawn, their speech sometimes doesn’t jibe with the way they’re described.

That said, the chapters read like individual stories, all while feeding the larger narrative, which compels the reader forward. There are moments here when Rance recalls both Tom Sawyer and Huck Finn, which make his adventures that much more enjoyable. While more period detail would have been helpful, young readers will nonetheless get a taste of history reading about the small town. For the most part, Nobody’s Boy From Caneela is an enjoyable coming-of-age story that should engage young readers.