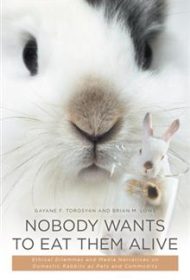 Working on the premise that news media reflects a society’s collective attitude toward certain issues, the authors analyzed a sampling of 942 news articles about rabbits written between 1990 and 2011 to determine how the news items should be classified within five categories: ethical (rabbits as humanely treated pets), commodity (rabbits as a source of food or fur), medical (rabbits as test subjects), environment (rabbits as pests to be destroyed or hunted), entertainment (rabbits in literature and film, etc.), and change (rabbits stories wherein their value shifts from negative to positive and vice versa).

The authors found that the ethical category comprised the largest group and also demonstrated “the most significantly growing trend in society”; in other words, the authors see society increasingly viewing rabbits as worthy of humane treatment.  They discovered that the “second strongest trend in the perception of rabbits” lay in “their exploitation as commodity.”

The authors are frank about their motivation in writing this monograph.  Both own rabbits and feel that rabbits should be treated humanely. They suggest that a “sociozoologic” study such as theirs may broaden the acceptance of rabbits as animals that should be treated ethically. Despite this bias, the study appears to have been performed meticulously, and the authors provide a solid theoretical background, as well as numbers and graphs to support their premises.

Readers may question why the authors chose to cut off their article sampling in 2011, instead of bringing the study up to the present with an end date of 2015.  The text is also marred by a spattering of typos and verb agreement problems.

While this book is clearly written and easily accessible to general readers, its subject matter is specialized and may only appeal to those with an interest in rabbits, animal advocacy or semiotics.