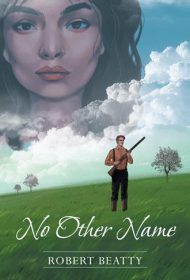 Robert Beatty’s, No Other Name, is a sweeping and tragic historical romance novel.

The story centers on Samuel, a farm boy who, on the night of his high school graduation dance, is convinced by his best friend Ben that they should celebrate by losing their virginity at the local whorehouse.

There, he meets “Clarinda,” a beautiful, captivating new prostitute who is about his own age. “Clarinda” refuses to tell Samuel the name she was born with, insisting that he call her whatever he wishes. Despite not knowing her name, Samuel is sure, after one night of passion, that she’s meant to be his wife. But a tragedy occurs, and Samuel ends up fleeing town and eventually joining the military.

The sweeping saga follows Samuel through more than 30 years of history, up through his fighting in both WWI and WWII. The novel’s first third is about Samuel and Clarinda’s relationship and the impact her tragedy has on his life. The remaining two thirds covers the rest of his life, including what happens once he joins the Marines.

Unfortunately, often the omniscient narrator takes readers out of the novel’s time period by offering modern observations; for example, when noting that Samuel’s beliefs about sexually transmitted disease treatments are wrong, the author writes: “Actually, he was somewhat wrong on the point about there being no treatment for venereal disease in that period.” The narrator also mentions Bruce Springsteen and The Who lyrics and describes things as being of “that time period.”

Beatty compounds the story’s problems by including long discussions of history from each time-period, from 1910 through WWII. While the asides are often interesting—who knew, for example, that mercury was a palliative treatment for STDs?—they distract from the main story.

Additionally, the dialogue is weighted with characters talking in long-winded paragraphs, and Beatty gives away the entire, tragic synopsis of the book in the first chapter.

The biggest problem with the book, however, is its heft. At almost 1,000 pages, the length will intimidate many readers. For the story to reach a wide audience, it requires trimming; shorter, snappier dialogue; fewer historical asides, and a narrative that stays true to its time-period.