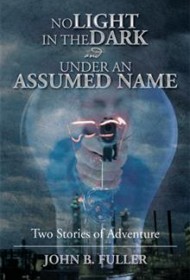 John B. Fuller’s book offers two adventure stories: one a near-future post-apocalyptic tale, the other a story of corruption and mistaken identity.

In “No Light in the Dark,” Stanley Knowles returns to his small hometown in Nova Scotia to put his estranged father in an old age home. But Stanley reconnects with his father and decides to settle there and take over the family farm.

Stanley’s contented existence is disrupted when the power grid goes down, apparently permanently. He turns the farm into a refuge for neighbors and others. As the years pass, the group confronts logistical challenges as well as outsiders seeking to impose authority on them.

In “Under an Assumed Name,” military sniper Herman Hines is arrested on trumped-up charges and spends three years in prison. When he’s released, the government enlists him for one final assassination. Herman realizes he’s been set up and goes on the run. Eventually, he happens upon a cabin – and a dead man, whose identity he steals. Then Herman receives a letter from the man’s grandchildren, begging their “Grampy” to return and salvage the family company.

Post-apocalyptic fiction relies on a reader’s sense of solidarity with its main character or characters. Although Fuller’s initial portrait of Stanley is promising, readers never really see him develop or change. Especially after the power goes out, “No Light in the Dark” is a series of disparate events that never slows down enough to develop the world and community Stanley and his fellow survivors inhabit.

“Under an Assumed Name” also suffers from underdevelopment, though a bit less so. With more descriptions of Herman’s military career and prison experience, his solitary life in the cabin and his boardroom shenanigans, the story could make a fine dark comedy, but it, too, features too many abrupt transitions.

Although both of these stories, particularly the latter, contain some fine ideas, they need significant expansion before they are likely to appeal to a wide audience.